The autumn moon in mid-sky 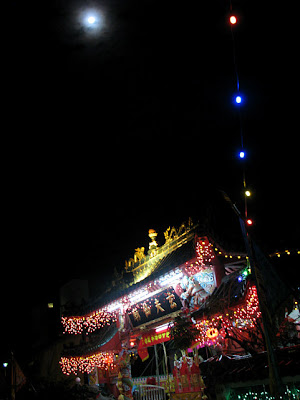 Yesterday was the 15th Day of the Eighth Month, officially Mid-Autumn when the moon was supposed to be at its roundest and brightest. It was raining in the late afternoon, and there was still an overcast of clouds at nightfall, hiding the moon.

After dinner, armed with my multi-featured Canon Powershot S5 digital camera, I took a walk around my neighbourhood in Serangoon North Avenue 1, hoping to capture pretty shots of children carrying lanterns. All I saw were a few parents with dispirited kids shuffling in the park, most of them twirling sparklers, which irritated the hell out of me.

Walking back home, I passed a pair of temples with brightly-lit frontage. Suddenly I noticed the moon over the temple roofs, unveiled in all its high majesty. Twisting my neck upward, I managed to catch it together with the temple, with my camera.

In the 1950s when I was growing up in Amoy Street in the heart of Singapore’s Chinatown, Mid-Autumn Day was an important evening to celebrate with mooncakes and lanterns. Hundreds of children and not-so-young teenagers would be scrambling along the five-foot-way, showing off intricately-designed lanterns. There would be streetside wayangs and hawkers selling snacks and knick-knacks.

In those days most Singaporeans were very, very poor, and the various festivals (usually on the 15th Day of the lunar months) were the only events that brightened their grinding existence. Besides Mid-Autumn Day and the 15th Day of Chinese New Year, there were the bak-chang festival on the 5th Month, the noisy celebrations during the 7th Month for hungry ghosts, and the joyful ceremonies commemorating Bodhisattva Kuanyin’s Birthday. My grandmother, my father and my uncles would prepare elaborate dishes for prayer and dinner.

Festivals then had a strong spiritual component. Incense and paper were burnt, and blessings from the Gods were sought. My grandmother and most of the elders would also take the opportunity to ask for lucky numbers to buy lottery.

Today, folks are moderately well-off, and with cash, every day can easily be Chinese New Year, as my late mother used to say. There’s no need to wait for special days. Affluence erodes the spiritual edge in our lives because we are not so dependent on divine favours; although I notice the Tua Pek Kong temples (in Amoy Street, in my estate at Serangoon North, and elsewhere) continue to be packed with devotees. For most people, traditional Chinese religious beliefs and practices are becoming less meaningful.

Of course we still need myths to live by, and by default the Angmohs with their Christian-based Hollywood religion have to do it for us. So, we have Tolkien’s Lord of the Rings, Stephen King’s aliens and the Harry Potter magical creatures. And not forgetting monsters, demons and heroes from World of Warcraft.

Your strategy, as a mindful, discerning individual, is not to allow Western pop culture, print and entertainment to dominate your leisure and reflection. By all means, enjoy World of Warcraft and other computer-generated fantasies. But take regular time out to read, to reflect and to check if the rain clouds have been swept off, and the moon shines clear in the sky.

Here’s a parting thought from Tu Fu, the Tang Dynasty poet:
The moon is brilliant at mid-sky but who is there to see?

Posted by flightstick at 8:23 PM